Taken from my post on the RBR CX forum:

Heres a NorCal report: Grass Valley CX part of the Sac Series #8 of 9.

I heard before showing up that the course was mtn bike friendly. Something i dont get too excited about (why have a cross bike if a mtn bike is the weapon of choice?) My start time was at 9:45a. I began my preriding at 8:45 after reg'ing. There was a short gradual uphill on pavement, then a sharp right onto dirt, a triple uphill barriers (and the hill continued past the last barrier so it seemed better just to run the whole thing), then some ups and downs, a log on an uphill, a steep run up a levee of sorts and then back down the same really steep levee, some quick turns and some more ups and downs, then a double barrier, a fast section including a 180 turn on cement and back to the start we are.

i got to the line 5 mins early, took front row, and all the sandbaggers were there----when you win 3 out of 4 times (the other time being a 3rd) youre a sandbagger--upgrade dude. I didnt get a good jump off the line, maybe about 6th going onto the singletrack. then after say 2 laps got caught by two guys. with 2 laps to go, i saw one guy take a major spill going down the steep descent, then the guy in front of me stacked it right on top of him it looked like. so i decided to run down the steep descent and remounted at the bottom. i got caught by the two guys behind me. coming into the 180 cement turn a guy on a mtn bike took the inside line and shot past me too fast, then slammed on his brakes, his front wheel locked up, his rear wheel came off the ground, and he went off the road but stayed up (my heart was up in my throat a bit, because ive seen enough guys go down right in front of me in road racing to know what can happen when it does). Made my way around him, and fought off the guys behind me and came ever so close to one of the guys whom passed me mid race. took a 7th overall out of 22. i think im like 4th overall in the C's pts series. Awards went down to 9th in the Mens Cs and i got 2 single serving Clif powder, a clif bar and a clif shot. Then went to Nevada City and walked around with my girlfriend on a nice sunny crisp day in Northern Cal.

good job all
jeremyb
at 5:47 PM No comments:

Pictures of my race bike (Candice) at 18.47 lbs with double chainring

I would have taken a pic of Lafawnduh, but shes loaded up as my commuter right with my NightRider Hid light and bags and such, she weighs in at about 20.5 lbs when unloaded. 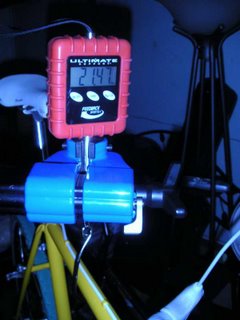 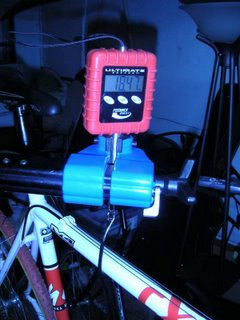 So I just got my Tufo Tubular Elite LPS 32mm tires in the mail. Yellow---to go with my gold rims. They weigh 315 and 336 each, which is a pretty heft discrepency, but their lighter than the Prestiges that I already have and supposedly ive been told that they ride better and have a lower psi limit. Havent yet received my Am Classic front hub that i nabbed off of Ebay for $50 shipped, which seems like a bargain to me especially since they retail for like $109 her in the states. Im considering having the front hub anodized gold, i think that would look really cool. Ill only get it done though if I get a gold King or Tune rear hub. Christmas is coming so maybe ill ask for that. Below are some pics of the weights of the OR-10 rims, 338 and 337 grams and the new tires 630 grams for the pair: 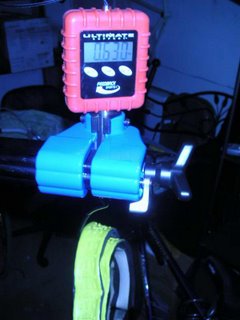 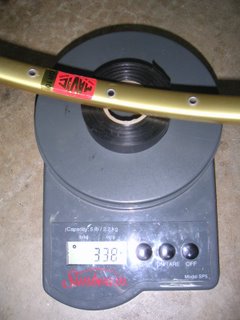 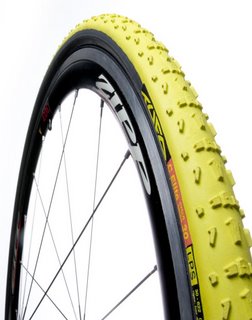 My plan for next year's season is to have two identical Specialized CX bikes (no cash for two new Specialized Tri-Cross') no im talking about the 2000-2003 Specialized M4 CX bikes. As far as wheels go---im going to move my current set of Tubular wheels over to the pit bike (which will have double chainrings) then the gold wheelset will be put on the race bike (which will have one chainring) then im going to build up another wheelset using Araya Aero 1 tubie rims laced to an Ultegra rear hub and probably some ultegra level front hub with Tufo T30 tubular tires for my new SS CX bike. With a set of training wheels (clinchers) in the pit if need be. But im thinking if i cant finish a race with 2 bikes in the pits then maybe im not supposed to finish that race. It also looks like im going to be relocating up to Portland in July and racing cross up there next year, so cross crusade here i come! www.crosscrusade.com for more info.
at 5:39 PM No comments:

So the update----I finished my Singlespeed Cyclocross bike, shes un named at this point but ill think of something, im thinking of some kind of school bus reference. This is what i posted over at RBR: I had bought a Nishiki Sport road bike from the local thrift store in order to convert it to a fixed gear, which I did. Then, I saw the singlespeed race in Golden Gate park last year and decided I wanted to do that too. So I went home and found that my Nishiki had enough room in the rear triangle to accept a cyclocross tire. I had the canti mounts brazed on by the guy that does retrotec bikes (Curt Inglis), then had Sycip powdercoat it. The color came out way wrong (it was supposed to be burnt orange) but it’ll do. I didn’t get it finished last year, and just in the last few days decided that I wanted to try a singlespeed race this season. And now finally the build is done (minus a starnut installed and a topcap). Interesting notes or aspects of the bike are the Cinelli Alter stem that I stripped down and am using the hole already in the stem as a front brake stop. The custom decals are from www.vinzdecals.com which say Nishiki. The brake levers are Campy and must have came out just when “aero” brake levers came out so they can be ran aero or standard. As you can see ive ran the front brake standard in order to use the stem as a brake stop and the rear brake routed under the bartape. Boone titanium 19 tooth cog on the rear. Also, last year I picked up this retro Nishiki jersey----ill be wearing it only when on my school bus beast. Final build is:

Im not too sure about the handlebars yet, im accustomed to the standard bars and have never rode on moustache’s or anything like these before (DirtDrops etc) they might stay or they might come off. Everything else though seems good thus far. My concern when building it up was never on weight (Cinelli Alter stem is an anchor) but it came out at 21.5 lbs so I was impressed by that. Sorry my camera seems to be on the outs, so some of the pics didn’t come out too good. One of them is when i first brought her home. If you see me at any of the races say hello. 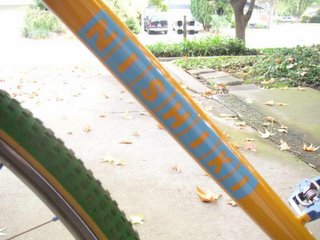 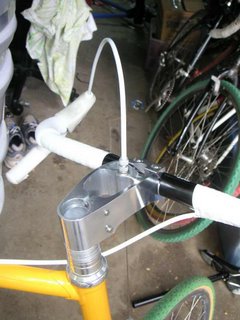 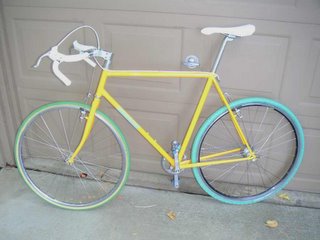 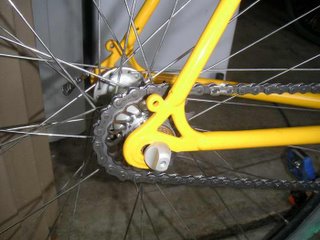 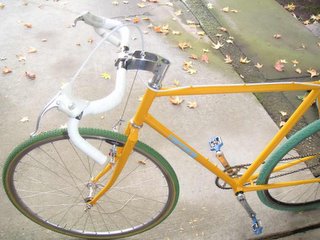 Well, im sore. What a tough race out at Vacaville this morning. Mens C started with 22 men said the very official official. On my warm up laps, i had an idea that this wasnt my kind of course. It had some very technical sections in it as well as a good deal of climbing. 2 items I cant hide from. Maybe if it was or the other than ok, but not both. I got a decent start, i didnt field myself on the front line, but rather off to the side about one place behind the front guys. I was 6th or 7th going into the first technical gully. I ran it every lap (although most were riding it) i didnt really lose any places but it probably prematurely wore on me during the race. I ended up getting 8th place out of 20 finishers--guess there were a couple DNF's. Training in Sacramento---I'm pretty decent at going fast on flat ground, not going up hills too well though. And my background in time trialing doesnt lend itself to mtb style courses. Next week the race is at Grass Valley, and from what ive heard its another mtn bike friendly course with climbing and sketchy descents. Great! Cant wait. The good news is two weeks after that will be the final two races in the Sac CX series and their both on flat land and shouldnt be too techy.

Over the off-season id like to learn how to ride better in the tech stuff because i expect to upgrade to B's next season, maybe ill do some mtn bike races in addition to the triathlon (kayaking and running) training i plan to be doing. we'll see.
at 11:54 PM No comments:

So, i made the trip up to Reno yesterday, to do the first race of their 4 race series. This one was held at Callahan park. It was a challenging course that had 2 creek crossings and a lot of sand (especially on the turns).

I was able to only do 2 practice laps before the race begun, and after doing those laps I was a little intimidated about how well i was going to be able to do due to a few crashes in the sand. The race was Mens C combined with Women and Juniors. On the line were 5 Men's C, 3 women and 3 juniors. I seeded myself not on the front row because of those practice laps, but then, once the race begun i went right into 3rd place, behind one Mens C and one junior.

After going around the course a few times I was able to get a better handle of how it was laid out--mainly gradually uphill on one half of the course with a double barrier but no other technical section and the other half of the course had one forced dismount to climb over a pile of boulders, and there were 2 creek crossings, and 2 semi gnarly sand pits. I ended up running both creeks and both sand pits. I didnt think i could make the creek crossings (although later I saw most of the Mens B's doing just that) and I felt much faster running the sand than riding it.

I ended up getting passed by one of the women about half way through the race. And ended up finishing 4th overall behind one Mens C, one junor and one woman. It was a good race, a good course (although I would have liked more road section) and the results were out within 24 hours.