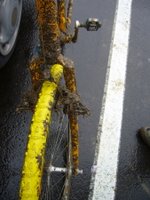 Today was the 2nd Cross Crusade race here in Portland, and starting before I woke up the rain came down pretty good. I was excited about this, cause I havent raced in mud before. The rain kept pouring when I arrived at the race I was able to pre-ride some sections of the course before my race in the SS division began.

The race went okay for me, I was able to stay competitive and catch some guys in the latter half of the race. And unlike last week where I was dead after a few laps, today, I was surprised to see the 1 lap to go card so "soon" even though it came at the right time.

The mud was very slippery and people were sliding all over the course which was pretty cool. No idea how I finished, but the race "felt" a lot stronger than last week.
at 10:44 PM