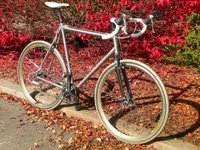 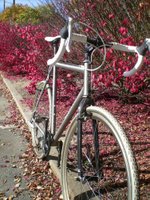 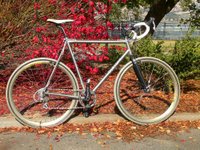 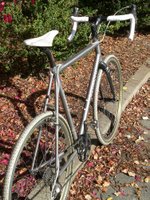 edit:
I wanted to send you a better breakdown of the bike and it's parts spec.

Frame: It's a custom TI DeSalvo that would be about a 60cm, depending on how you are measuring it. It has a 60c-c top tube. It's made from straight gauge ti and totally bomber. Mike made it completely to my specs and it fits and rides like a dream. I could have went with a longer headtube, but I wanted to have a bit more space under my stem for the cable to be routed.

Fork: Reynolds Ouzo Pro Cross. I just got this about a month ago and I'm really digging it. It's lighter thanthe Wound-Up I had on before and rides a bit smoother. The brake pads also clear the fork legs a bit better.

Wheels: I have a set of tubbies and a set of clincers. They both use Chris King hubs, are 32 hole and 3 cross front and rear. I'm a bigger guy and while light wheels are nice, stiff and durable are a bit more important to me. The tubbies are laced to a set of CXP 30's and the tires are either Challenge 30's for the grassier, muddier stuff or Vittoria 34's for the drier, rockier courses. The clinchers are CXP 33's and I run the WTB Interwol's or the IRD Crossfires.

FSA is all over the bike with the headset, stem, bars (the new K-Force Shallow model), seatpost, cranks, rings and BB. Come race season, I pull the SLK compact double crank and run a single ring on a set of 130 bcd SLK's with the FSA gucci guards. A 12-27 stays on the back year round, but race time calls for the Dura-Ace version, whereas the rest of the year is Ultegra.

I'm on my last set of original Dura-Ace 9sp STI's, the ones without the Flight Deck nubs. They run a bit narrower and are easire to descend in the hoods. I have gutted a dead left one and use it when I'm in 1x9 mode so the hood shape is the same. When these die, I'll cry big crocodile tears and probably have to pony up for the new 10sp stuff.

Oh yeah, the pedals are Shimano M959's not Times. Good enough for guys like Tonkin, then it's good enough for me. Any hoo, the bike weighs 19lbs. on the dot and is ultra reliable and most importantly to me, quiet. I hate noisy bikes or ones that creak, shudder and groan. I do enough of that on my own without my bike needing to chime in. Feel free to edit my long winded blah, blah blah if you want. See you at the Crank Bros Grand Prix in Hillsboro.

If you have a custom made cyclocross bike, email it to me at plusonelap@gmail.com