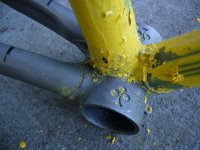 Part one of the series here.

I got a call from Tony of Pereira Cycles saying that the process went smoothly and that it’s ready to be picked up.

The dimpling looks like it’s going to work really well. Tony was able to give me six more millimeters (totaling a rear width of 39mm) so now my 700x30’s have a healthy amount of clearance. Yeah, it’s not as much as a dedicated cross bike, my Specialized M4 measures 45 mm, but it’ll be enough I think. 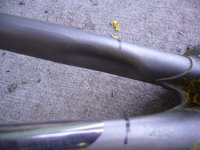 The dropout spacing changed after the dimpling process though. It was spaced at 130mm before and now its 121mm. Not a big deal, re-spacing a steel frame isn’t too hard, so I’ve read. I’ve never actually done it, but Sheldon Brown has a pretty informative tutorial on how to do it on his site here that I am going to do. I just need to make the decision, is this bike going to be singlespeed or geared? 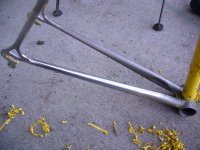 My singlespeed Nishiki (which is also a converted road bike) has 126 spacing and thus my burgeoning collection of SS wheels are spaced at 126mm. But if I make this geared, then all my cassette type rear wheels are the now standard 130mm.

I really like the simplicity of a singlespeed bike. One gear = few problems. But I already have one of those----do I want two singlespeeds? Currently, my geared Specialized cross bike is in pieces (mainly because I’m lazy and unmotivated to build it up as I’ve been having enough fun with the Nishiki). But in the end, I think I am going to make this bike my geared cyclocross ride.

Doing some more research on the frame by looking over the catalogs at bulgier.net, and it looks most like a Super Sprint from the 1988 catalog.

But from what I’ve read all the late 80’s bikes had “Colnago” stamped into the drive side chain stay, and mine doesn’t have that, so it’s a probably an earlier version.

After doing some more powdercoat stripping of the frame and fork, I’ve found what I expected, that the fork was chrome before they brazed the canti’s onto it. But, the crown is still chrome and in good condition, and I will probably leave the crown chrome with the legs of the fork white. The combination of white and chrome on this bike should look pretty cool, and I already have a cool retro white saddle to go her. 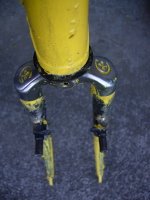