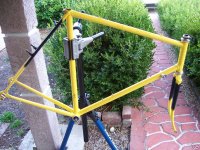 This is the first installment of a series documenting the conversion of a Colnago road bike into a Colnago cyclocross bike.

Your first thought might be don’t wreck a perfectly good Colnago frame. But I didn’t, I’m just continuing where someone else left off. I got the frame and fork (which also included a Dura Ace threaded headset and a Shimano BB) from the same source of most of my bike junk---the Ebay. It was being sold as a “cyclocross” bike that was actually just a Colnago road bike with cantilever braze-ons already attached. I was concerned with rear tire clearance, and the seller assured me that he had run 700x35’s in the rear without issue. That news gave me the green light to bid, and I “won” it for $173 plus shipping. 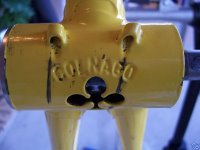 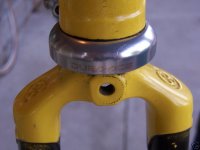 When I received the frame, I was disappointed to find that there was no way 35mm tires were going to fit as my 700x30 Michelin’s rubbed. I got out my calipers and measured the width of the chain stays and it was 33mm. How could 35mm tires fit into a frame that was only 33mm wide? I emailed the seller, and he stuck by his guns saying that he ran 35’s without issue, and that some tires don’t actually measure what they’re supposed to. True, most tires don’t end up at the stated width (those 700x30 Michelins I have actually measure 31mm) but there’s no way his tires could be that mis-measured.

Now, I was at a crossroads. My options as I saw them were to A) run narrower tires like 700x28’s, B) sell the frame as is C) remove the cantilever braze-ons, repaint the frame and sell it as a Colnago road bike (which it is) or D) see if a local frame builder could widen the chain stays so as to allow a wider tire to fit in there.

I’ve always wanted a Colnago, and I love riding cyclocross, so I wanted to try and make this frame work, but I didn’t want to use 28mm tires, so I looked into option D.

What I found is that local frame builder Tony Pereira of pereiracycles.com was able and willing to do the job of dimpling the bike, and he’d charge me a reasonable $30 to do it. The catch was that, in so doing, the chain stays may crack and I’d have to not hold him liable for that unfortunate consequence. I was willing to give it a try.

Before I took the frame to him though, I used some industrial epoxy/paint remover to get off the old and crap yellow powdercoat (PC) that graced this frame. This was not an easy process…the stuff was ugly and on there good. A few days worth of labor and I got the rear triangle fairly PC free. What I found was pretty cool, the dropouts and the right chain stay are chrome. 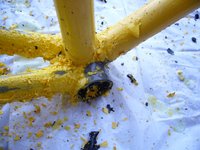 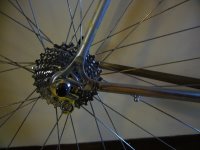 So that’s where it stands now.

sweet! looks like this one might even top the singlespeed. can't wait to see the next installment.

Intresting project, I am interested ot see what you do with the brakes. Maybe you could post a picture of the completed colnago on my new Colnago blog site ?http://colnagoblog.spaces.live.com/blog/

you should see Ernesto's latest creation, the one with all the butterflies, only 100 being made. I think La bicicletta, the road bike store in Vancouver, www.labicicletta.ca has one.