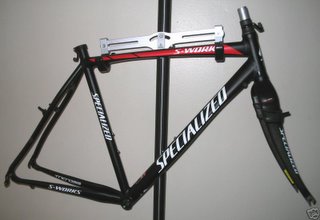 So I've been scouring ebay for the past few weeks, trying to find a new frame that was going to be my new "race" frame for next season and beyond. Originally, I wanted a frame that was identical to my 2001 Specialized. But then once i broke her down and realized that it wasnt the weight weenie frame I had hoped for, I decided to look for a match to my 2004 Trek XO1 frame. When I got outbid on that identical frame I was a little pissed, but then again, I couldnt rationalize spending $400 on a 2 year old used frame, no matter how similiar it was to my current one. In several posts ago, I mentioned that I really wanted the new Specialized S works cross frame but didnt want to pony $1100 for it. Well, one came up on Ebay a couple days ago in my size and after I sold a number of things on there in the past week, I had the cash to pull the trigger on it. I think its going to be a pretty sweet rig once I get her built up. It might take a little longer than planned to actually get this built now, because I just spent my wad (remember, I'm currently not employed). Is it madness to spend $700 on a bike frame when you dont have a job? Maybe. But I had $640 in my paypal account, so doesnt that count for something? I sure hope so. 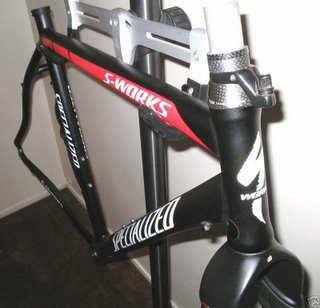 You did the right thing. Keep bike money bike money!

yeah i think so too. thanks for the good words though josh.

i know, for the meantime, im just going to use my WoundUp at 590 grams, but eventually I want one of the newer ones like Easton or I think even the Alpha Q.

I'm riding an Alpha Q right now and it is great, but if I were to do it over I think I would ge the easton. Its cheaper and lighter...downside? it has RACK MOUNTS...WTF?

I'm riding an Alpha Q right now and it is great, but if I were to do it over I think I would ge the easton. Its cheaper and lighter...downside? it has RACK MOUNTS...WTF?