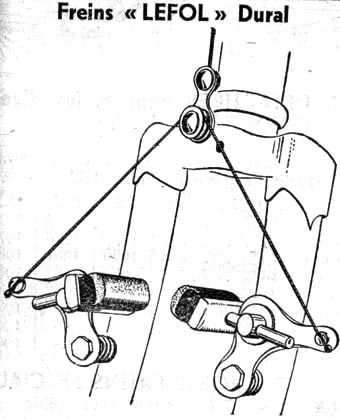 I've posted about this before, but I think its important. Cantilever brakes get a bad rap because people dont know how to set them up. And dont think that taking your bike to your LBS will solve all of your problems----just learn how to do it yourself.

Again, I went to the internet archive and found this series of articles from Keith Bontrager.

Edit: in case the link isnt working, I saved the info and posted it verbatim here (without pictures):

Unfortunately the pics arent loading, but the information is still good, just long winded. Read some and then come back.

The Background
(How did this happen?)
Cantilever brakes used to come with these nice, simple straddle wire carriers. These disconnected quickly to let you get the wheel in and out, and held the cable in a way that let you adjust the relationship between the straddle wire, brake arms and main brake cable independently. Riders who understood them liked them.
They also took a little time to set up right. Bike manufacturers, who have to pay people to assemble bicycles by the hour, did not like them.
There was also a darker side to this. The straddle carriers let the straddle wire disengage from the carrier and fall into the tire if something really weird happened while you were riding, like if you let the main cable degrade too much and it broke, or if you were really sloppy and didn't hook the wire up right when you put the wheel on. The straddle wire got caught in the knobs and the rider got to do a Superman impression sometimes. Some lawyer's (those who worked for manufacturers) didn't like this and wanted an idiot proof system. Other's (guess who) liked it just fine and probably made their Mercedes payments with their fat cuts of the legal settlements. An individual's position depends on which side of the courtroom they sat in I guess.

The new parts.
Shimano to the rescue. Shimano came out with straddle wires and carriers that fixed the distance between the carrier and brake arm. Easy to install, no adjustment necessary, none possible, and not much hope of getting any braking power if the thing wasn't set up with the right parts from the beginning. Sure, you could buy a bunch of different straddle wire lengths, so you could get the brake dialed, in principal. But, somehow, this never seemed to happen with standard bikes. Rider's who knew the old systems just changed a few parts and the brakes worked for them again. Riders who didn't were pissed off about their brakes.
The old systems were not doomed. There were a few ways around the rider's problems using old standard parts. First, you could just pay a little attention to the condition of the parts, hook them up right, and risk the occasional weirdness on the trail. The risk is very, very small. Cables don't just jump out of the carriers with everything set up reasonably well. Good for riders with mechanical skills - not good for the manufacturers lawyers.
Or you could hang a piece of safety wire off the stem or fork brace and loop it under the straddle wire. If anything broke, the wire caught the straddle cable before it hit the tire. You only really had to worry about the cable falling into the front wheel - a skidding rear wheel isn't fatal very often. 1 This wasn't very pretty, but it worked like a charm (Mark Michel at the Bike Trip in Santa Cruz showed me this one first).
The next easiest solution was to get a new straddle carrier design so the straddle wire is captured in use but still adjustable. You could bend a tab gently with some pliers on a stocker, or go for a $20 CNC anodized after market carrier that would do about the same thing. I don't know much about these, and I would never give gold for this sort of thing when pliers and safety wire would do the job. I'm weird that way.
I'm always working on brakes. I calculate the mechanical advantage of the system, just to see what's going on. I am always playing with designs. The mechanical advantage of one of these brakes is not the same as measuring the distance from pivot to pad and pivot to cable attachment (the ratio most punters refer to when they talk about braking leverage - a very misleading thing to do). The best way to do the calculation is to figure out how far he pad moves toward the rim for a given increment of main cable travel. This is the mechanical leverage for the system, excluding the lever. This ratio changes as the parts in the system move, so it's not a hand calculator job, though that would do in a pinch. It's best to do it on a spreadsheet. There are a couple around here somewhere so you can get an idea of what they look like.
From this analytical stuff you can see the effects of changes in the geometry of the system - pivot locations, cable lengths and angles, all the stuff you would need to know if you wanted to design good brakes or set up the ones you have the way you want. The spreadsheets show you details like how far the pad moves vertically (not a problem if you set the brakes up right) and horizontally, where the straddle wire and arms should be, etc. Fun stuff. Not as much fun as spending a lot of money on new parts, or a few other things I can think of, but still pretty fun.
Click here to see how it's done
(1) If you are going to look for somebody else to blame and then sue them when things go wrong for you, use the safety wire on both wheels.

Bontrager SPEED-B-GONZ - circa 1986? - all parts made by Laura
Besides, I knew that the rest of the world could get good leverage out of standard cantilevers if they wanted it (and it's not clear to me that this is a huge improvement in a bike's performance). You just have to dial them in right. No one would be silly and buy an expensive brake if there was no clear advantage to it.

700c Speed-B-GONZ version (borrowing heavily from Mafac design).
What was that???
First of all, I was wrong again. Predicting a charge for the cliffs by the masses is a psychological puzzle, not an engineering exercise. Not my forte.
Second, standard cantilever brakes really can be dialed in to perform as well. The magazines forgot to mention this, but then, disclosure of technical information really isn't their mission is it.
So the appropriate question now is, what if you didn't get some? Could you have trick brakes somehow anyway? Step right up. For less than $10 invested in some old style parts you can match the stopping power of the V brake with most cantilevers, even the cheapo STX units. You won't have to throw away your current, expensive shifter/brake lever combos just to feel what it's like to ride with brakes that have a high mechanical advantage. You may find you don't like it that much anyway. You won't have to survive by eating kidnapped pets for dinner just because you spent all your money on brakes that can send you over the bars with one finger. You can even get an edge by letting those lemmings that have been sucked in know just how much money they wasted.
Retro? Maybe. Depends on what you mean by that. Bad attitude? (As in, How can we keep this industry snowballing if you're going to be so damned practical?) Yep. Not my problem. Useful information? Yes. I ride with tricked out cantilevers. (Except the Pissing Dog prototypes, duly equipped with V Brakes and other prototypes). We don't sell anything I recommend in this document.
The LARGE PRINT giveth and the small print taketh away ( a line stolen from Tom Waits who probably stole it from someone else)
It's not all blue sky. The downside of the modifications (neatly arranged in more cool bullet points)�
• It costs $10 or so for the parts.
• You have to know what you are doing to do it right.
• The parts may be hard to find so you'll have to find a shop where they keep obsolete inventory around in order to score some of them.
• The straddle wire ends up about the same distance from the tire as the bottom side of the fork brace, closer than it is with the stock parts. It might catch a mud or twigs occasionally, but not very often in my experience, and not enough to slow you down.
• The leverage in the modified cantilever brakes is more sensitive to small changes in the set up due to wear. As the pads wear the system loses a little leverage. You'll have to maintain the brakes, especially the overall cable and pad adjustment, to keep the leverage high.
The last bit isn't unique to cantilevers. Brakes require adjustment. It's no big deal - a fact of life. V brakes chew through pads with the best of them. They just don't go through much of a change in leverage as they wear. You have to adjust the pads in the cantilever brake back to the original settings every now and then, instead of just cranking out the adjuster barrel on the lever all the time to keep them strong.
There may be a way out of this someday. If the guys hawking disc brakes ever figure out how to con the magazines into a good, relentless, fully hyped up rave about them, there may be less maintenance intensive brakes in the future. Maybe it would get launched if Shimano came up with one, so there's some serious horsepower and big ad money behind it? In the meantime there are a lot of other technical hassles to work out with discs; it's definitely not their time yet for most riders. We're stuck with having to know what to do and how to do it with inexpensive, easy to maintain, good performing, boring, practical parts. Bad news, eh? Sorry.
There is a way you can get around all of this if you are stuck with old style, out of date, out of fashion, not really up to the task anymore seemingly, cantilever brakes. Really. You have to replace a few nickel and dime parts that the lawyers made obsolete years ago, set them up right, and away you go, errr� stop.