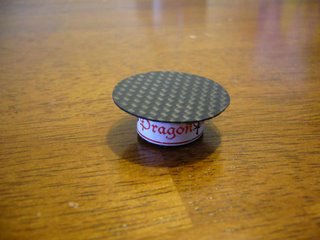 So, in the last installment of the +1lap DIY channel, I showed you how to make carbon bar end caps. This time were making a carbon top cap assembly.

So, let’s start from the beginning. Topcaps are for suckers. The topcap is tightened to compress the headset bearings appropriately, then the stem is tightened down, then the top cap becomes a gravity virus on your bike. They don’t really do anything after the stem is tightened (other than keep rain and mud out of your steering tube) I mean, its not holding the compression still, because your stem isn’t loose it it? I rode all last season in cyclocross without a topcap at all.

I got teased a little, “what trying to save some weight?”

Well, some people have crammed a beer bottle cap into the steering tube to add a little flair. That works well. But I’ve noticed sometimes the cap doesn’t fit in there too great. Schmolke makes a carbon topcap and they can be bought for $60. They say that there’s supports the carbon steer tube from being crushed. Well, my Alpha Q fork already has a compression thingy in there protecting the steering tube, so I decided to make a decorative top cap that would look cool and keep the rain and mud out.

I used the same carbon plate as I did for the bar caps. But you’ll need another type of carbon from Dragonplate for this project too. You’ll need the carbon veneer stuff (its bendy). This is what fits inside of the steering tube and then the carbon plate is JB welded onto the top of the ring.

The veneer stuff can be cut with kitchen scissors (just don’t let your significant other see you do this) to a size that fits within the steering tube and allows for about a ½ inch overlap. Apply some JB weld between the two parts that will be overlapped. This will sandwich the JB weld between the two layers. Then, apply some JB to the inside of the ring so that there’s JB all over the place securing the piece of veneer to itself. Let this sit overnight.

Next, cut a piece of carbon for the top cap (mines about 1 ¼ in diameter). Then place the topcap piece upside down on your work area, set the ring on top of it, and apply JB to the interior of the unit, coating it well. Let that dry. 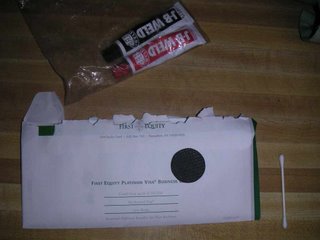 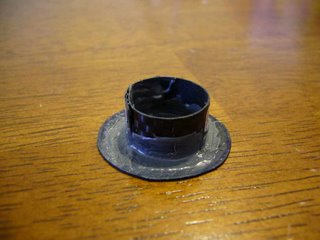 Then push it into place. Simple. 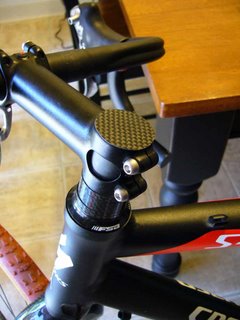 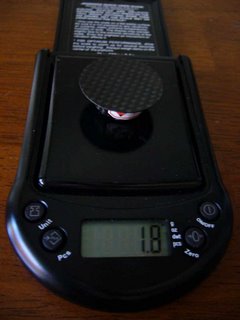 Stock topcap assemblies with steel bolts can weigh 16.2 grams (I just weighed one I had in my tool box) you can drop this weight by using an aluminum bolt or you can make one as I did.

My carbon topcap weighs only 1.8 grams. And again, it looks really cool.

And yes, for those playing the home game, that is my Specialized Tricross that is almost built up.